Why English is giving us bad habits

Is it just me, or has ‘that’s a problem for future me to deal with’ become a fairly standard phrase in our day-to-day conversations? Research suggests that the way the English language is constructed may make native English speakers more inclined to live in the present (arguably no bad thing!), but also less likely to plan effectively for the future and more likely to engage in self-indulgent or even damaging behaviours.

I haven’t made it to the gym in weeks - can I blame it on a strong future tense?

In English, we strongly disassociate the present from the future. We say “tomorrow I will start saving money”, or “tomorrow I’m going to start saving money”; we use future markers (a different tense) to distinguish between what’s happening right now and what will happen at some point in future.

But it’s always today, right? We can’t travel forward in time. So when we say ‘I will start saving money tomorrow’, we’re always referring to a time that doesn’t actually exist. Meanwhile, in the reality of the here-and-now present tense, we are spending all our money on takeaways, pints and Ubers.

So what’s a weak future tense? (and where can I get one?)

Unlike English, some languages have a weak future tense. In German, for example, the future feels (grammatically, at least) much more tangible in the present. Germans would say, “Morgen regnet es” which, directly translated, means “It rains tomorrow”. Tomorrow’s rain is still in the present tense – so tomorrow’s rain is today’s problem. Umbrellas at the ready.

The popular theory among linguists is that being required to talk about the future as distinct from now – a different event in fact – leads native English speakers to take fewer future-orientated actions.  After all, if it’s going to happen in the future, why worry about it now? Whereas in languages with a weak future tense (German, Japanese, Mandarin and most Scandinavian languages, as examples), speakers are much more accountable to their future selves.

In 2013, a study at Yale University set out to prove the notion that people who speak a language without such a strong future tense are less obese, smoke less, practise safer sex, save more and retire richer. Of course, multiple things influence these behaviours. But even after controlling for a number of economic and demographic factors, the study showed a clear difference.

And it’s not the only evidence for such a trend.  In 2019, a Swiss research team published their findings which similarly showed that language affected money management.

Switzerland is a fascinating example because of the melting pot of languages spoken within the same nation. By comparing the French, German and Italian speaking Swiss nationals, the research team were able to show the disparity in spending habits according to language and culture, rather than socio-economic factors.

People in the German-speaking regions saved more – and young people leaving home for the first time there had larger incomes, fewer financial difficulties and fewer debts.  By contrast, the French speakers were most likely to be in debt.  And again, the syntax of the languages (the German’s weak future tense compared to French and Italian’s strong differentiation between now and the future) was cited as one of the main reasons.

Ok ok, I see your point. But I’m not sure I like it

It’s hard to argue with the science.  But the thought that the very root of our language can have this much impact on our prosperity – in so many areas of our lives – well, it’s not so easy to swallow. Then again, can we really make sweeping generalisations about people’s life choices based purely on their mother tongue? Anecdotally, I will say that the only person I know with an actual five-year plan is German. She’s very committed to it. But is that down to language, or personality, or something else altogether? Impossible to say.

So what should I do?

Whatever language(s) you speak, it’s great to be able to focus on the present moment – and to make good choices for your future. But maybe on a subconscious level, the way grammar functions in our native language(s) does in fact impact the way we think, speak and act. Crazy eh.

What a great reason to learn another language though! Then you can be zen and in the present moment in English, and simultaneously prepared for anything in your weak-future-tense language of choice. 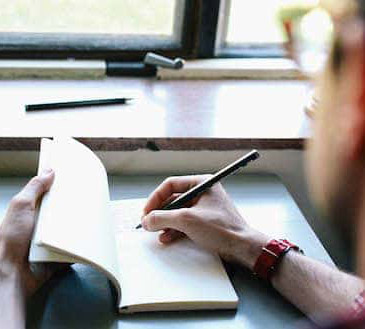 It’s ok, just reassure your future self that you’ve got it all (or will have it all) under control.