Diversity (or lack of) in the translation industry: the Amanda Gorman controversy

On January 20th 2021, Amanda Gorman became the youngest inaugural poet in US history. Her poem “The Hill We Climb” called for unity and collaboration and inspired a divided nation. However, when it came to translating Gorman’s work, a debate began to ripple through the translation industry on an almost unprecedented scale.

Marieke Lucas Rijneveld, who is white, was selected as the Dutch translator, raising the question; should a white translator translate a black woman’s work?

The debate has shone a light on the lack of diversity within the industry; providing an opportunity to reflect on and learn about areas that need improving within the industry, and to actively listen to unheard marginalised voices.

In February 2021, Meulenhoff, a publisher in the Netherlands, announced that it had selected Marieke Lucas Rijneveld to translate Gorman’s book. 30-year-old Rijneveld became the youngest winner of the International Booker prize in 2020 with their debut novel “The Discomfort of Evening”.

Meulenhoff described Rijneveld as the “ideal candidate” for the job, as both Rijneveld and Gorman had been exposed to the spotlight early on as writers. Much of Rijneveld’s writing focuses on gender identity and mental health, and they have spoken of their struggles as a non-binary person.

However, having accepted the translation job, Rijneveld then stepped down after receiving significant backlash online.

One of the first critics to speak out against Rijneveld as the translator selected was journalist and spoken-word artist Zaire Krieger. She tweeted: “How salty on a level from one to the Dead Sea am I going to sound when I say that tons of female spoken word artists of color (Babs Gons, Lisette Maneza etc.) could have done this better?”

Following this, journalist and diversity campaigner Janice Deul wrote an opinion piece for the Volkskrant newspaper, stating that the choice of Rijneveld was “incomprehensible”. She claimed that choosing the 30-year-old was a “missed opportunity,” adding: “They are white, nonbinary, have no experience in this field, but according to Meulenhoff, are still the ‘dream translator’?”

However, talking to the BBC, Deul emphasised that the backlash was not due simply to a white translator translating a black poet’s work. Instead, she clarified that the issue lay with: “The specific poem of this specific orator in this Black Lives Matter area”.

In Germany, publisher Hoffmann und Campe decided to take a different approach to translating Gorman’s work. It opted to create a collaborative team of three translators, who were instructed to prioritise the poem’s “political and social significance”. Together they searched for the right words and the right phrasings – even emailing Gorman for clarifications.

The trio consisted of author and activist Kübra Gümüsay, Afro-German political scientist, journalist and author Hadija Haruna-Oelker, and poetry translation specialist Uda Strätling. Speaking about their approach to translating the piece, Haruna-Oelker said: “It’s about quality, it’s about the skills you have, and about perspectives.”

Lack of diversity within the industry

The controversy has rightly opened up a much-needed debate around diversity within the industry and highlighted the importance of representation.

Weighing in on the debate, the American Literary Translators Association (ALTA) expressed that too much emphasis was placed on “whether identity” should be the “deciding factor” in translation. It said that this is “a false framing of the issues at play” and stated that the real issue was the “scarcity” of black translators in the industry.

According to the New York Times, in 2020, ALTA conducted a diversity survey and found that out of the 362 translators that responded, only 2% were black.

In a statement on its website, ALTA said that the scarcity of black translators is caused by “long-term patterns of discrimination in education and publishing”. These patterns, it said, make it “harder” for these translators to “access opportunities comparable to those available to their white counterparts”. Further to this, the association said the “criteria for these opportunities” have “historically been defined in white-centering ways”.

Of course, elsewhere in the literary world, the diversity debate has been prevalent for quite some time. Dutch author Corinne Duyvis coined the #Ownvoices movement in 2015 in response to the lack of diversity within literature. #Ownvoices seeks to create a more diverse literary landscape, where “diverse characters” are written by authors from that same “diverse background”.

According to the Cooperative Children’s Book Center’s 2019 annual survey, only 29% of the protagonists in books published that year were not white or animals. On top of this, only 11.9% of books had protagonists that were black. Of this 11.9%, only 46.4% were authored by black writers.

Reactions from across the industry

The reaction to this debate from those within the translation industry has been mixed. Some have expressed disappointment that a poem intended to bring people together has led to people feeling more divided. Others argue that the very nature of translation makes the application of #Ownvoices challenging.

In an email to the Los Angeles Times, Alain Mabanckou, French Congolese writer and professor at UCLA, commented: “One simply cannot fight against exclusion by reinventing new ways of marginalizing people”.

Nuria Barrios, the translator who worked on the Spanish version of the poem, echoed the same sentiments and called Rijneveld’s step down “a catastrophe”. Writing in El Pais, she said: “It is the victory of identity politics over creative freedom, of the given over the imagination”.

She added: “To remove imagination from translation is to subject the craft to a lobotomy that makes it impossible to exercise”.

Elsewhere, Gümüsay, one of the German translators who worked on Gorman’s poem, said the future of translation lies in collaboration: “The future lies in trying to find new forms of collaboration, trying to bring together more voices, more sets of eyes, more perspectives to create something new”.

Meanwhile, closer to home, the UK Translators Association and the Society of Authors made a statement in early April, outlining their stance on the debate. They argued that while “an individual’s identity” should never be a “limiting factor,” it is time to improve transparency, accountability and inclusivity in publishing processes”. 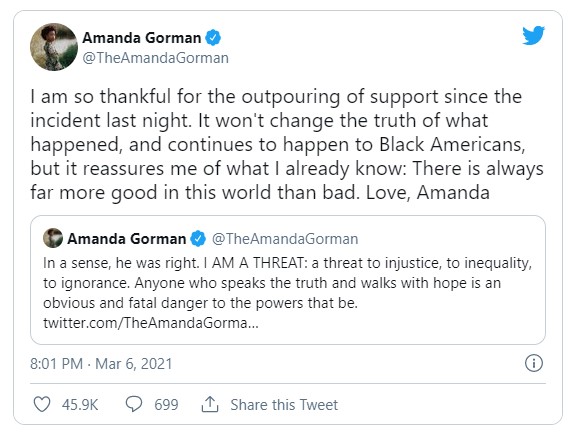 It will be interesting to track the ripple effects of this debate – is diversity in the translation industry something we can hope to achieve in the near future?

They also explained that the debate highlights the importance of “extending opportunities” to a “much broader intake of emerging translators,” including “translators of colour and translators from communities, backgrounds or identities who have been and continue to be marginalised and underrepresented in the publishing landscape”.